Today, we are going to show you the glimpse of a place where every couple would think to visit. This site is called the Tunnel of Love. This tunnel is located 7 kilometers ahead from the city of Klevan in Ukraine. This is a 3-kilometer private railway track that is covered with trees in a manner that looks like a tunnel. 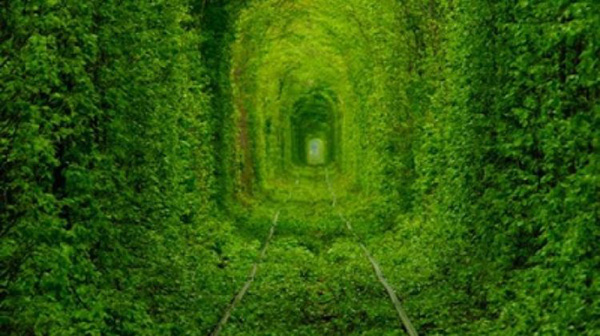 Tunnel of Love is an industrial track for timber work. During the construction of the railway, the trees were deliberately installed on both sides of the track to conceal the transport of military hardware. For the past several years, here, trains are passing for aim to provide wood to the factory which produces plywood for the Western European market. This railway track is 5 kilometers long and is surrounded by green-rich arches and trees. A train supplies wood to the factory 3 times in the day, at other times it is used by the couples and Nature Loving people.

The nature of the trees is grown independently around the track. Some years ago the factory owner had tried to cut trees so, that the train could pass through the track comfortably but there has been no change since the people does not want to have any change since 2013. This long tunnel is popular for photo-shoot. The tunnel is also used by those couples who want to fulfill their wishes.

Tunnel of Love changes its color 3 times a year. When spring arrives, the tunnel of love becomes completely green, and then this place is seen as a paradise. In the summer, the tunnel has light brown color. As the winter arrives, this tunnel rolls the white snow sheet. Being popular among couples, it is also called the Tunnel of Love. It is said that when any couple goes through this tunnel and ask for something, their wish is certainly fulfilled.