In the US Senate Hall, there is a drawer in the table which is placed on the right side of the hall and which is always full of toffees and chocolates. Senators who like sweets can take advantage of this ‘candy desk’ anytime. However, it will be called the misfortune for the Democrats that this “candy desk” is on the side of Republicans in the Senate hall. 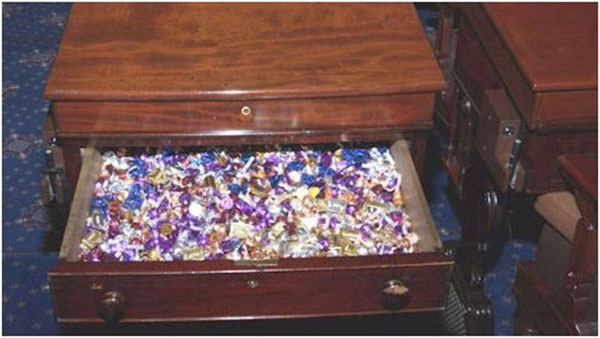 The tradition of ‘candy desk’ began in 1965, as Senator George Murphy always used to keep candies in his desk drawer for his colleagues. After he left Senate in 1971 his successors continued this tradition. Even though there is a ban on eating in the chamber, but no one wants to stay away from the chocolates.

This tradition was started by a person who used to like sweets a lot and always loved to keep sweets with him. Later on, he realized that his candy-filled drawer had become a popular place to stop and had become a focal point for each and every senator.

Murphy’s desk was near to the most used entrance of the chamber. The manner in which seats are divided into the Senators, there is no possibility of going this candy desk to any senator anytime from Democrats. Always there is an excitement between senators who will be the lucky one to get the ‘candy desk’.

Although Senators are prohibited from receiving gifts worth more than $ 100, this prohibition does not apply to those products which are manufactured in their home state and given to third parties. Mark Kirk, who was sitting at ‘Candy Desk’ before Pat Tommy, had filled it with Mars Bar, Milky Way, Jelly Belize. All of these confectionaries are made in their state Illinois.

Prior to them, the famous ‘candy desk’ was allotted to former presidential candidate John McCain. Pat Tommy got this seat in 2017. He says, everyone knows that Pennsylvania is the candy capital of America.

It’s perfect that they made me a candy man. His state is the center of 200 confectionery companies and he keeps on filling his candy desk from candies. Even the Democrats also come on the candy desk. They have also started keeping candies and chocolates but they have to spend from their pocket.