The German Shepherd breed is also known by its British name Alsatian. These dogs, as is known by their name Shepherd, are adept at grazing, protecting and controlling sheep herds. It is still used in European countries even today. Dogs of this breed are considered highly loyal. 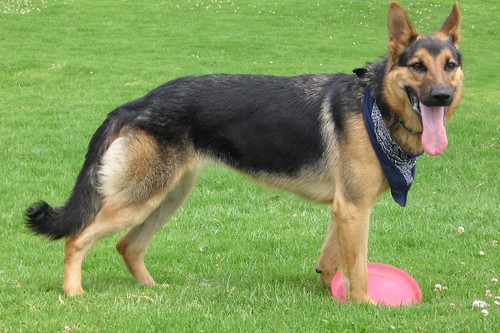 The German Shepherd breed is one of the world’s favorite dog breeds. These breed dogs are ideal pets for a wide range of tasks including support and assistance, search and rescue, police and military roles and acting for the disabled due to their strength, intelligence, training, and obedience.

The specialty of dogs of this breed is that they are calm and gentle in nature, as well as very aggressive towards their target. Although they are not very friendly but do not harm anyone without any reason.

Typically, German Shepherds are either gray-black or pale reddish-yellow and black mixed colors. They are also black and white throughout but are rare.

The German Shepherd is particularly noted for his intelligence. It is very easy to train them by adopting the right methods. In a book titled ‘The Intelligence of Dogs‘, author Stanley Kören places the German Shepherd third, after Border Collies and Poodles, to wit. In the research, they found that they had the ability to learn simple tasks by repeating only five times and they followed the first command given on 95% of the occasions.

It is this ability of the police service that makes the breed an ideal choice for finding clues and criminals, as guards and search and rescue dogs, as they learn quickly and interpret instructions better than other breeds. Are able to do.

A German Shepherd puppy can cost between 5000 to 25000 rupees. Depending on the hair of the dog, there is a difference in their price. They are divided into two categories with a single coat and double coat hair. Dog hair with double coat hair is more long and hairy and this species is considered rare and superior. Therefore, it also costs more.