Gurdwara is the religious place for Sikhs. The word Gurdwara stands for the way to reach guru or sage. In other words, it can be called as “the gateway to guru”. A Gurdwara always keeps its doors open for people of all religions and faiths. The objective of this place of worship is to find inner peace and unite with the Holy Spirit. All Gurdwaras worship the holy book of Sikhs “Guru Granth Sahib Ji”. The origin of Sikhism and Gurdwaras started from the holy city of Amritsar, Punjab. Wherever the Sikhs are, they make it a point to visit the Gurudwara near their house to offer their prayers. Here is a list of the 10 most famous Gurdwaras in the world. 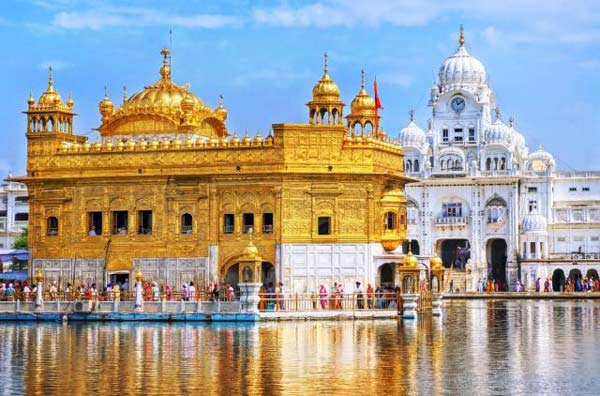 Hari Mandir Sahib, which is famously known as the Golden Temple, in Amritsar is one of the most sacred shrines in India. Guru Arjan Dev laid the foundation of this sacred shrine in the year 1588 and in 1604 he placed the Holy scripture called Adi Granth there. There are four gates in the Golden Temple that symbolizes that Sikhs accepts people from all walks of life. Every day thousands of followers come here to seek blessings from the guru. On the day of Gurpurab, many people put up stalls outside and serve langar to the devotees.  Here one can find everything, from ceiling to the electric cables, covered in golden color.

Hemkunt Sahib is situated in Chamoli district of Uttarakhand and is known for its architecture. Dedicated to the tenth Sikh Guru, Guru Gobind Sahib, the gurudwara is located at an altitude of more than 400mts above sea level. It is a star-shaped Gurudwara that has been specially designed keeping in view the weather conditions and altitude of the place. This is located in the state of Uttarakhand. It is located at a height of 15000 feet above sea level. It is considered as the pilgrimage center for the people across the religious divide.

Hazur Sahib, also known as Takht Sachkhand Sri Hazur Abchalnagar Sahib, is one of the five takhts in Sikhism. It is located on the banks of the Godavari river in the city of Nanded in Maharashtra. Hazur Sahib served as Guru Gobind Singh ji’s last residing place. His followers then built a room over the platform where the Guru would sit, and instated the Guru Granth Sahib there. Much later, in 1830, Maharaja Ranjit Singh had the present building of the Takht Sahib constructed around the room containing the holy scripture.

The Paonta Sahib Gurudwara is among the most famed Gurudwaras in India. Situated in Sirmour district of Himachal Pradesh, it is popularly referred to as the place where Guru Gobind Singh Ji wrote the pious Dasam Granth. There are two versions of why this gurudwara was named Paonta Sahib. Some say it is because Guru Gobind Singh set his foot here; others say he lost an ornament that he used to wear on his foot here. It is a sure shot way to restore mental peace and soothe the tired soul if you do happen to be in Panchkula. Pay your respects, recite the ‘hukumnama’ of the day and don’t miss the Langar.

Fatehgarh Sahib is a town and a sacred pilgrimage site of Sikhism in the northwest Indian state of Punjab. It is the headquarters of Fatehgarh Sahib district, located about 5 kilometers north of Sirhind.Fatehgarh Sahib is named after Fateh Singh, the 7-year-old son of Guru Gobind Singh who was seized and buried alive along with his 9-year-old brother Zoravar Singh, by the Mughal Army under the orders of commander Wazir Khan during the ongoing Muslim-Sikh war of the early 18th century. The town experienced major historical events after the martyrdom of the sons in 1705, with the repeated change of control between the Sikh and Muslim rulers.6.

One of the nine historical gurudwaras in Delhi, Sis Ganj Sahib commemorates the martyrdom of the ninth Sikh guru, Guru Tegh Bahadur. It is here—now located in the winding alleys of Chandni Chowk in Old Delhi—that Guru Tegh Bahadur was beheaded at the orders of the Mughal emperor Aurangzeb on 11th November 1675, for refusing to convert to Islam. Before his body could be exposed to the public, it was stolen at night by one of his disciples, Lakhi Shah Banjara, who burnt his house to cremate the Guru’s body with honor. Today there exists another historic gurudwara to mark the site of his cremation, Gurudwara Rakab Ganj Sahib.

Damdama literally means a breathing place and it was, in reality, a place for Guru Gobind Singh, who relaxed in Talwandi Sabo after fighting a battle. Talwandi Sabo is about 28kms from Bhatinda, Punjab. Damdama Sahib is also one of the Takhts of Sikhism and is a historically important place as well, as it is here where Guru Gobind Singh wrote Bir of Sri Guru Granth Sahib. Also, it is the same place where Guru Ji tested the faith of Singhs.

Popular as Manikaran Sahib, Gurudwara Shri Narayan Hari is situated in Manikaran, which is about 45kms from Kullu. The Gurudwara is the result of 50 years of consistent labor put by Baba Narayan Hari. According to some accounts, Baba Narayan came to Manikaran and started building a Gurudwara, where he constructed a small wooden structure. This Gurudwara had to face local people’s anger, who demolished it each time he started to rebuild it. However, Sant Narayan Hari didn’t lose hope and within 50 years constructed a bigger Gurudwara. Today, Manikaran Sahib is one of the most revered Sikh places of worship in India.

Gurdwara Shri Keshgarh Sahib is located in the center of the city of Anandpur Sahib, Punjab, India. It is also known as “Takht Shri Keshgarh Sahib” and is one of five highest Sikh institutions in India; it is the city’s main Sikh shrine. The city began as Chakk Nanaki, which was founded by Guru Tegh Bahadur Ji in 1665. His son, Guru Gobind Singh Ji, who spent 25 years of his life in the city, added greatly to the city’s size, giving it the new name, “City of Bliss (Anandpur).”Its foundation stone was laid on March 30, 1689. In fact, it was here that the Khalsa Panth was born with the first initiation of Khande Di Pahul when the young Guru called for a special congregation on the Baisakhi day of 1699 with thousands of Sikhs in attendance.

Takht Sri Patna Saheb also knew as Harmandir Saheb is a Gurudwara in the neighborhood of Patna Sahib, India. It was to commemorate the birthplace of Guru Gobind Singh, the tenth Guru of the Sikhs on December 1666. It was built by Maharaja Ranjit Singh (1780-1839), the first Maharaja of the Sikh Empire, who also built many other Gurudwaras in the Indian subcontinent. The current shrine of Patna Sahib or Takht Sri Harmandirji Saheb was built in the 1950s. Guru Gobind Singh, the tenth Sikh Guru, was born in Patna, Bihar, in 1666. He also spent his early years here before moving to Anandpur Sahib.