There is an incredible village in the world which is extremely unique. In a remote Miao village in the Guizhou province of southwest China, a small community of villagers refused houses that the government offered them, and decided to continue living in caves in the mountains of Anshun. The Miao ethnic minority group has lived here for centuries and has developed a quasi-tribal society and built roofless houses, schools and a basketball court inside the 230-meter-long, 115-meter-wide and 50-meter-high cave. The inhabitants use the water falling from the rock and grow wheat in the hills near the quarry.

The cave is conveniently warm in winter, cool in summer and dry all year long. To take in enough sunshine, light and fresh air, most of the houses squeeze along the entry of the cave. Benches, beds and dining tables are the prominent decorations. One peculiar thing here is that each house is marked with a door number and separated by bamboo fences. Considering the moderate size and good neighbor relationships, both are more a token than a necessity. 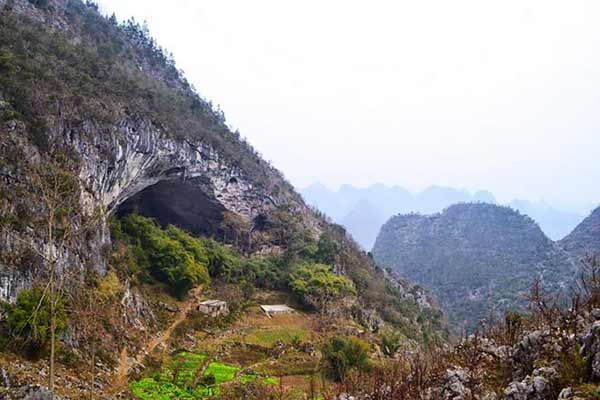 In China, they became famous after a China Daily articles of 2007, which depicted them as modern troglodytes. Other articles claimed they were the last tribe who lived in a cave in Asia (but that’s not true.) Since 2007, when the community counted about a hundred members, the cave is now inhabited by only 18. Most of the people left the village in search of money and job opportunities, and the remaining group now has to build a water reservoir to solve the issue of water supply.

Villagers weave the fabrics, grind the rice, cultivate rice and raise pigs or cows. Although living in the hills, far away from the urban environment, the group is not completely isolated from the rest of the world.  Each week, they will buy necessities in the market which is 15km away, on foot. They have television and use the telecommunication signal of the quarry. Their children have books and, every once in a while, somebody brings newspapers and magazines.

This cave shelters not only Miao villagers, livestock but also a school, built in 1984, the only one of its kind in the world. During its heydays, over 200 students studied here. In 2010, Zhongdong School was shut down and all the students are transferred to a school nearby and these classrooms, together with basketball field and tennis (Ping Pong) tables, are left deserted. 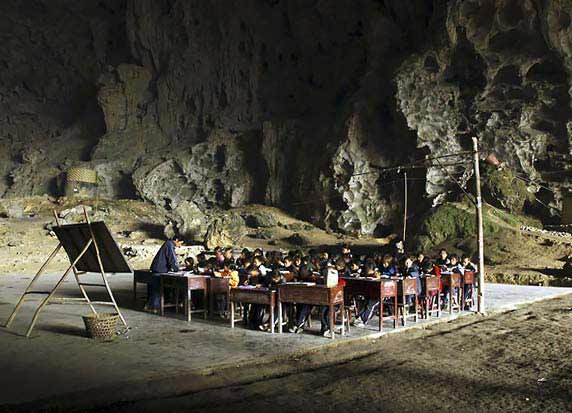 In 2003, Hank Bode, an American, visited Zhongdong Miao Village. Overwhelmed by their plight, he denoted over 100,000RMB to build the electricity wire for them. Since then, nights in this cave is not engulfed by darkness anymore. To improve these villagers’ life, he dropped by three times later and gave each family the needed funds to purchase livestock. The peculiar life in Zhongdong Miao Village was documented and broadcasted on TV.
The village elders have been trying to lobby local government to build them a road linking the cave to existing infrastructure. Currently, it is an hour’s walk through mountain passes to the nearest road. The elders are insistent that if a road is built, it would drastically improve the standard of living for those at Zhong Dong. Crippled by inaccessibility, the farming community of Zhong Dong finds it difficult to transport their sellable good to market. The children could be driven to school on motorbike taxis, instead of walking for 2 hours every morning and again every evening. The adults would enjoy improved job prospects. The whole community would benefit from the laying of a road, far more than they would have from the poorly-planned and unwanted housing project, had the local officials only listened to those they govern.

25 Amazing mobile phone facts that will shock you!

Let’s Know: Why It Is Important To “LAUGH”