By making Taj Mahal in memory of his beloved Begum Mumtaz Mahal, Shah Jahan gave the world an exemplary example of love. But even in this era, what a person has made for his love is not less than any Taj Mahal. That person planted 7,000 trees to make guitar-shaped forests as a tribute to his wife. You may have seen many forests, but have you ever seen some forest in the shape of the guitar? If not, then we are showing you today, a similar forest that has been planted in the Shape of Guitar.

There is also a love story behind this guitar. This green guitar is made by Pedro Martin Ureta, a farmer whose age is about 70 years old. Pedro was separated from his wife in 1977. His 25-year-old wife, Graciela, was pregnant 5 times. During the delivery of the 5th child, she died due to brain disfiguration. To give tribute to his wife, this design was made by Urata on his farm and since then he has been irrigating those farms. 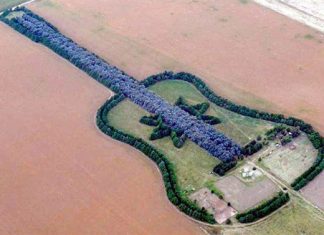 Pedro, 28, was married to 17-year-old Graciela. They had four children. Inspiration to plant this forest was given to Pedro by his wife Graciela. Graciela was passing through Pampa one day in the plane, and she saw a farm from the plane. That part of the ground seemed like a pot of milk.

Graciela came home and talked to her husband about this and said that she should also do something better on her land and make her farm a huge guitar because Graciela always liked Guitar. But Pedro, who was busy in his work, never paid attention to them. When Graciela left her, she decided to fulfill her wish.

In 1979, Pedro started working on this project with the help of no designer. Pedro and his four children planted each plant on their own. This guitar-shaped forest is spread over 10.2 x12.3 square kilometers. The trees were planted in a way to make sure that when they grown, the guitar size should be clearly visible and emerging. Pedro took care of this forest along with the care of four children and today when plants became the trees, then the guitar forest looks very clear from the sky.

Cyprus plants were used to give the shape of Guitar’s body and to make the 6 sound hole of Guitar Nilgiri plants were planted. Pedro made this guitar for his wife but he has not been able to see his work till date.

Because it can only be seen from the sky and Pedro is afraid to fly in the sky. Urata admitted that due to a painful accident in his young days, he is afraid to travel in the ship He has only seen pictures of the forest planted by them. But whoever has seen this sign of love from the sky, their trust in love has become even stronger.

What is Law of Attraction And How It Works?