Have you ever seen an umbrella flying? Or we look at such films and stories. But now there is a new creation which is a flying umbrella which is made recently. Let’s know about such umbrellas:

An IT company from Japan developed the flying umbrella. This can fly with the help of the drone. The special thing is that in the rain, the person does not have to hold it and walk. Being a sensor, it keeps roaming around the person. 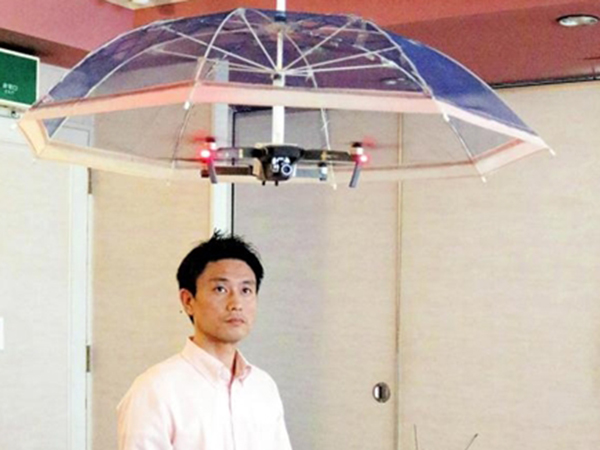 It weighs 5 kilograms, which can fly for 5 minutes at the moment. Therefore, in the event of holding luggage in both hands, this umbrella can be of great use. According to the regulations of Civil Aeronautics in Japan, the drone must be about 30 meters away from the person in the public place or the building.

In the beginning, this flying umbrella can be used at private places. The goal of the company is that in 2020 it could be used in practical use before the Olympics and Paralympics. Ash Power, a telecommunications system developer, has been working on this sample for a long time. This prototype has problems now.

Due to the high weight, it does not fly for long. If the person does not move slowly, then it won’t be able to run behind him. Being made of net, it is difficult to prevent yourself from being wet in raining currently. The company’s president Kenji Suzuki told that the plan to build such an umbrella was made three years ago.

He believed that such an umbrella can be used even if both hands are busy. President Kenji Suzuki said that currently there is some problem in getting this umbrella out of the market due to regulatory laws. But, we hope that one day it will be common to see this umbrella on the streets.

These five cities are best to reside in the world